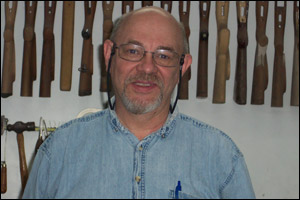 Dennis Smith is a rare bird. In today’s modern world, it is increasingly difficult to find real artisans – true craftsmen who are not only gifted at working with their hands but conscientious to a fault about their craft. Dennis Smith is one of these. He has dedicated the last 30 years of his life to perfecting his craft. As a member of the American Custom Gunmakers Guild, he has achieved a high mark of excellence, affirmed by a board of his peers, who are the best in the industry.

I started working with gun stocks in 1981 at Kimber of Oregon, and after moving up in responsibilities and experiences, I later continued with Shooters Emporium of Portland until 1997. That same year, Fajen of Missouri brought me on to supervise their custom shop which challenged my skills to new levels. After Fajen closed its operation, I took my part time stock repair business – “The Stock Doctor„ – and went full time, turning my dream job of custom stock work into reality.

For a number of years, my goal was to become a member of the prestigious American Custom Gunmakers Guild, as a stockmaker. Years before, I had been encouraged to pursue this by a fellow ACGG member, Darwin Hensley. For the next seven years, I continuously worked on and perfected my craft, becoming one of the primary repairers and customizers of stocks for an English gun manufacturer located in Springfield, MO. In 2000, I returned to Oregon to be near family and continue my trade, and in 2003 I achieved the goal of membership into the ACGG when they accepted my submission of one side by side rifle and one bolt action rifle.

Over the years, I have worked on all manner of stock and gun styles from the 1700′s to the present. Although I build custom stocks for any shooting discipline, I am particularly fond of bolt rifles and side by side double guns. My work motto is SIMPLE EXCELLENCE.

I hope you enjoy the gallery pictures, and appreciate your interest. I′m happy to answer your questions and look forward to earning your business!

Dennis has three passions in his life; gun stocks, family, and God — and he pursues each with great care, integrity, and devotion. I wrote the intro above because I felt it gives a brief overview of his unique gifting. It is rare to come across someone with these talents. Of course I´m a little biased, as his son in law, but the work really does speak for itself. I am always amazed at the level of detail and time he puts into a project, but don´t listen to me – look for yourself. You will be amazed.